The 24 hour urine Iodine test is the most accurate way to assess iodine levels in the body for people who have thyroid disease. If too much iodine can cause thyroid disease and hashimotos autoimmune thyroid disease, how do you know if you are getting too much? thankfully there are ways to test your urinary iodine levels.. However, most tests are not accurate, and in many cases, testing is not helpful.

More than 90% of iodine consumed is excreted in the urine, making urine iodine a good indicator of recent iodine intake. Collection of urine over 24 hours (μg/day) to quantify urine iodine excretion (UIE) is often considered the “reference” standard for describing population iodine intake, and is often used for validating other methods (7).

Iodine nutritional status is most closely estimated by the amount of iodine excreted in the urine in 24-h.

Some practitioners believe that the most useful test for detecting iodine sufficiency is the the urinary iodine to creatinine ratio. But this test can be skewed somewhat variable between individuals, depending on their

While having to collect your urine for a period of 24 hours can be more cumbersome, I believe when done correctly, it provides the most accurate assessment for nutritional iodine status. For these reasons I do-not recommend the urinary iodine/Creatine Test to take the place of the 24 hour urinary iodine test.

After ingesting a 50mg Iodoral® tablet, you collect your urine for 24 hours. With this test, Iodine sufficiency is determined by comparing the amount of Iodine taken to the amount excreted in the urine.

Iodine is an essential trace element, vital for healthy thyroid function. Adequate levels are required to enable the production of T3 and T4 thyroid hormones, whilst also being required in other areas of health. Deficiencies can lead to impaired heat and energy production, mental function and slow metabolism. Urine iodine is one of the best measures of iodine status. This test is not performed as a loading test, but can be used to establish existing levels or to monitor iodine supplementation.

The concentration of iodine in the urine is the most commonly used biochemical marker for the evaluation of iodine intake and its consequent sufficiency or deficiency. The gold standard for estimating the reliable urinary excretion of iodine is 24-hour urine, stored in a plastic container, and in a refrigerator. The method used for the measurement of iodine in the urine was induction coupled mass spectrometry (ICP-MS), with volume expressed in ml and result in μg/24h. Values of urinary iodine were considered as described in Table-1, and in gestation, 150μg/L

Iodine is an essential micronutrient and an integral component of thyroid hormones. Iodine is obtained only through the diet and is mainly absorbed by the gastrointestinal tract as the inorganic anion, iodide. The status of iodine nutrition of a population is determined by measurements of iodine as urinary iodide (UI) concentration since it is considered an indicator of the adequacy of the iodine intake of that population. In general, it is assumed that most ingested iodine, such as sodium or potassium iodide, is excreted in the urine, and that equilibrium is established between dietary iodine intake and UI excretion.

Blood Iodine almost entirely resides on the thyroid hormones thyroxine (T4) and triiodothyronine (T3), so blood iodine measures thyroid function more than iodine status. Extreme iodine deficiency will eventually cause hypothyroidism, but this is not usually the clinical question, which would be answered by thyroid hormone testing anyway.
Urine iodine testing has been used in epidemiological studies also because it is convenient and non-invasive but the transference of these findings to individual patient care has a major hurdle. The concentration of most analytes in urine, including iodine, depend on the amount of water also excreted into urine, therefore if a patient is dehydrated they appear high, if they drink water before the test, they may appear low. The usual way of correcting for the water content of urine is to correct the concentration of the analyte in question by comparing to the urine creatinine level .(Creatinine is a waste product from muscle that is produced constantly by the body.)
While iodine/creatinine ratios may be more useful when assessing individuals there are two problems (i) there is little agreement on what the thresholds are for defining deficiency and (ii) creatinine levels are higher in men than women, which means that men have lower iodine/creatinine ratios than women. 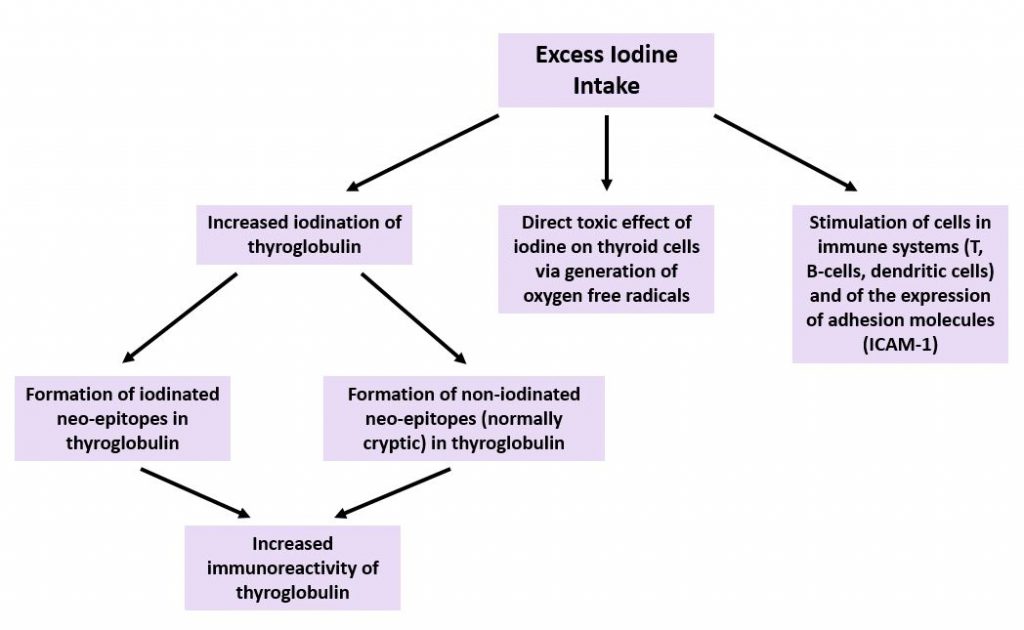 ****Please note that the test I recommend staring with is the 24 hour urinary collection. This is NOT the same as creatine/urinary iodine

**Before taking the 24 hour urinary iodine test, discuss any history of thyroid surgery and/or radiation, Hashimoto disease, and any previous problems with your thyroid with Dr Hagmeyer or you health care provider/