Diabetes, Metabolic Syndrome And The Connection To Thyroid Disease-

Dr. Hagmeyer explains why all diabetics and patients with metabolic syndrome receive a comprehensive Thyroid evaluation.

According to the American Association of Clinical Endocrinologists, 27 million Americans suffer from thyroid dysfunction – half of whom go undiagnosed.

Subclinical hypothyroidism, a condition in which TSH is elevated but free T4 is normal, may affect an additional 24 million Americans. Taken together, more than 50 millionAmericans are affected by some form of thyroid disorder.

With such a high prevalence of both thyroid dysfunction and metabolic syndrome, you might suspect there’s a connection between the two. And you’d be right. Click on the “Learn more about Our Thyroid Help system” to Learn more about Thyroid Treatment. 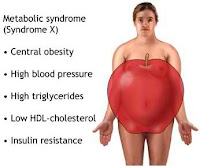 Metabolic syndrome is defined as a group of metabolic risk factors appearing together, including:

When you eat too many carbs, the pancreas secretes insulin to move excess glucose from the blood into the cells where glucose is used to produce energy. But over time, the cells lose the ability to respond to insulin. It’s as if insulin is knocking on the door, but the cells can’t hear it. The pancreas responds by pumping out even more insulin (knocking louder) in an effort to get glucose into the cells, and this eventually causes insulin resistance.

Studies have shown that the repeated insulin surges common in insulin resistance increase the destruction of the thyroid gland in people with autoimmune thyroid disease. As the thyroid gland is destroyed, thyroid hormone production falls. This is one of the mechanisms by which diabetics often complain of  fatigue, weight gain, mental sluggishness and pain.

The increased frequency of thyroid dysfunction in diabetic patients and its likely deleterious effects on cardiovascular and metabolic function calls for a systematic approach to thyroid disease screening in diabetes. Routine annual thyroid testing should be targeted at diabetic patients at risk of thyroid dysfunction, such as patients with Diabetes, positive thyroid antibodies or high-normal TSH concentrations.